Music and poetry evening 'The End of Romanticism' 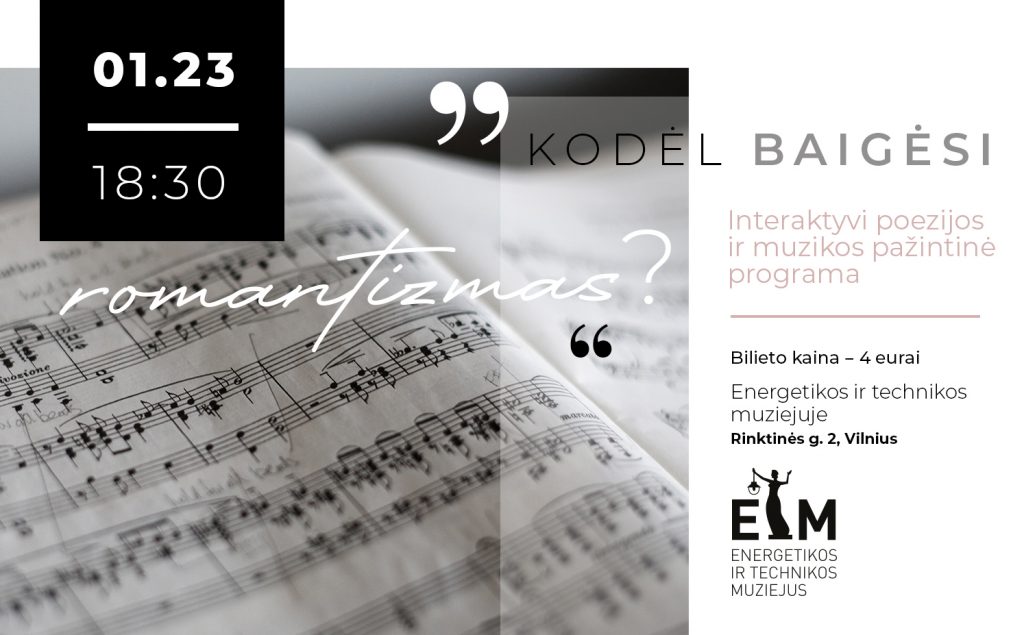 Is Romanticism really over? If yes, in what sense? Pianist Darius Mažintas and young-generation poet Eglė Kirilauskaitė will be answering these questions in an interactive manner, through poetry readings and piano compositions followed by a multi-layered discussion.

The audience will be kindly invited to join the discussion on the reasons that led to the end of Romanticism. Its postmodern transformations will also be touched upon.

The programme inspired by the dramatic love story of Frédéric Chopin and George Sand is a dedication to the composer’s 210th anniversary.

Due to his exceptional musical sensitivity and talent as well as appealing forms of expression and unique interpretations, Darius Mažintas has already gained recognition by Lithuanian audiences. As it was claimed by well-known Lithuanian conductor maestro Saulius Sondeckis in 2010, “the pianist is worth international attention, too”. The graduate of the Lithuanian Academy of Music and Theatre (the piano class of Professor Veronika Vitaitė) is a winner of numerous national and international music competitions.

While working as the Art Director at Vaidilos Klasika classical music project, Mr. Mažintas contributed a lot to classical music dissemination and talent discovery in Lithuanian cultural contexts. Projects titled Musical Heritage Representation in Vilnius City Schools and Letters from the Past were implemented by him. Other activities encompass numerous charity projects.

Several albums were recorded by the pianist among which a solo album (2011) including pieces by Bach, Beethoven and Scriabin present. The biography of the pianist encompasses over 150 successful concerts as well as numerous cultural and interdisciplinary initiatives aimed at spreading classical music for broader audiences.

Lithuania’s young-generation poet Eglė Kirilauskaitė follows the principles of performance art, and therefore for her poetry only becomes alive when it interacts with the audience. In her creative works, the artist tends to focus on highly Romantic topics revealed through the Postmodern spectrum, thus bringing us closer to 19th-century literary views.

Educated as an English Philologist and English Studies specialist at Vilnius University, the poet strongly relies on linguistic peculiarities, the play of words and especially musical patterns. For her, intonation, rhythm and rhyme form some of the most important poetic elements which are, among other things, canonical in the poetic discourse by nature. It is therefore not surprising that her successful artistic career is marked by music, and the poet often combines her impressive performances with concerts by the country’s most outstanding professional musicians.

Described as a real-life example of the modern cultural elite by the local press, the poet is a winner of numerous literary competitions and a participant of various national and international festivals. She is often a guest of literary events of national importance held by Lithuania’s cultural and academic institutions such as Vilnius University, Maironis Lithuanian Literature Museum, a number of libraries, manors and culture centres. Two collections of poems have been published. Kirilauskaitė’s uniqueness of linguistic choices and the subtlety of voice creates a refined 19th-century atmosphere transformed by modern-day artistic strategies and innovations.